Fever Phobia- Just a few supportive studies on why we should support fever rather than suppress it. 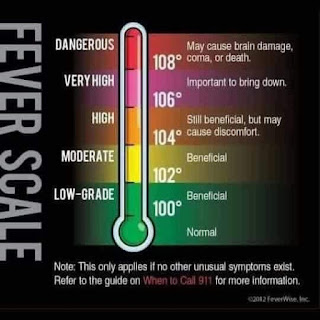 Antipyretic therapy may increase the risk of mortality with viral infections
https://www.nzma.org.nz/journal/read-the-journal/all-issues/2010-2019/2011/vol-124-no-1338/letter-eyers

A Practical Approach to the Treatment of Low-Risk Childhood Fever

Control of Fever in Septic Shock: Should We Care or Intervene?

fever may be beneficial because fever increases clearance of microorganisms, immune response, and the heat shock response (6–8). Furthermore, control of fever can worsen outcomes (9, 10), whereas increasing temperature after endotoxemia can improve outcomes in animal models (11). In a retrospective cohort study, use of corticosteroids for fever control in H1N1-infected patients was associated with increased mortality (12). Finally, patients with septic shock who have hypothermia have a higher mortality than patients with fever (13).

An increasing amount of evidence is now suggesting that fever lowering in infections, and particularly sepsis, may not be as harmless as previously thought. A number of studies that will be discussed here have shown that fever improves the immune response and leads to better outcomes in infections.
https://www.escavo.com/2012/12/23/should-fever-reduced-septic-patients/

Popular posts from this blog

Why This Doctor Doesn't Get Her Flu Shot!

October 24, 2017
Why Smart Doctors Don’t Get Flu Shots
Smart doctors don’t get flu shots.
Smart patients don’t either.
Does that mean you’re not smart if you got a flu shot?
No.
It means the pharmaceutical industry has you and your wallet right where they want you.
It means you believed the hype instead of looking at the science.
Smart doctors don’t get flu shots. But I’m a doctor and not only did I get them, I insisted my mom and my siblings get their flu shot too.
Once you hear my story, you will see that I can’t judge anyone who gets a flu vaccine.
But I do judge an industry that tries to terrify and deceive people into getting a flu vaccine they do not want or need.
I made my mom and siblings get the flu vaccine too
Growing up, I never had a flu shot and I also never had the flu. But as a young adult thinking about starting a family, I listened to my doctor. I was told getting a flu shot was not only good for me and my family, it was essential. Life-saving.
And not getting a flu shot?
Only irresponsib…
18 comments
Read more

Natural Alternatives to Tylenol: What to Give Your Kids, What to Take Yourself

November 01, 2017
Natural Alternatives to Tylenol: What to Give Your Kids, What to Take Yourself

We almost crashed our server this summer with our blog about why no doctor should ever recommend acetaminophen or prescribe a Tylenol-containing pain reliever again (colleagues, are you listening? FDA, how ’bout you?). Since then, I’ve fielded hundreds of inquiries from families—especially worried parents—asking WHAT to use instead of Tylenol?
Dr. Benton, what do I do for a fever?
Dr. Benton, what do I do for a headache?
What about for aches and pains?
What about for migraines?
Glad you asked. There are safe, effective, natural alternatives to Tylenol that will get your pain in check.
How to Treat a Fever Without Tylenol
Fever is actually a positive sign that your immune system is paying attention and fighting disease.
Fever is one of our body’s natural defenses against infection. Having a fever forces us to stay in bed—which gives our bodies time to heal.
Several studies have found that treating a fever c…
9 comments
Read more

You can probably guess my answer being an Integrative Physician.I figure since pharmacists say “only 2 % “ of children have a risk of psychosis as a side effect I don’t want my kids to be one of those 2%.As a friend posted on my page, Siri says there are 73.9 million children ages 0-17 in the US.2% of that is 1,478,000.Um.No thanks! In my blog, I explain why I wouldn’t get a flu shot either but I digress.

So since I have plenty of evidence as to why the flu shot is not effective, we all know that whether you get the flu vaccine or not, you can indeed get the flu, even if the same strain is found in the flu vaccine.“They say” that it won’t be as severe or you won’t have complications if you get the flu vaccine but the data does not support that either.So now you have a choice to do Tamiflu or go au natural and try some elderberry syrup.
I personally go for elderberry syrup and think it is reasonable for your average healthy person to go for the natural route.Sweet…
2 comments
Read more